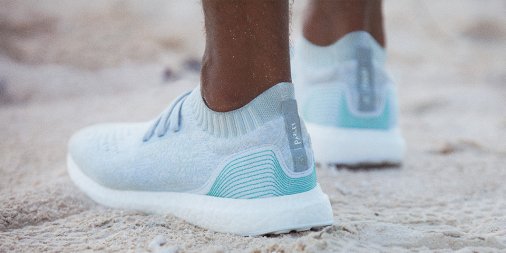 For a while, Adidas and Parley for the Oceans, an organization dedicated to reducing plastic waste in oceans, have collaborated on shoes made of recycled plastic from oceans.

This article originally appeared on Business Insider by Nathan McAlone.

Last year, they 3-D printed a prototype, with the goal of demonstrating how the industry could “rethink design and help stop ocean plastic pollution,” according to Adidas.

Now they are making actual pairs of shoes available for you to buy. Around 7,000 pairs will be sold at stores and online for $220 starting in mid-November.

The shoe has an “upper” made of 95% ocean plastic — scooped up near the Maldives — and the rest of the shoe is made from largely recycled materials as well. It’s called “UltraBOOST Uncaged Parley.”

While only 7,000 are going on sale now, Adidas has big plans for these types of shoes.

“We will make one million pairs of shoes using Parley Ocean Plastic in 2017 — and our ultimate ambition is to eliminate virgin plastic from our supply chain,” the company said, according to The Verge.

Here is what the Adidas and Parley for the Oceans shoes (and concept ones) look like: