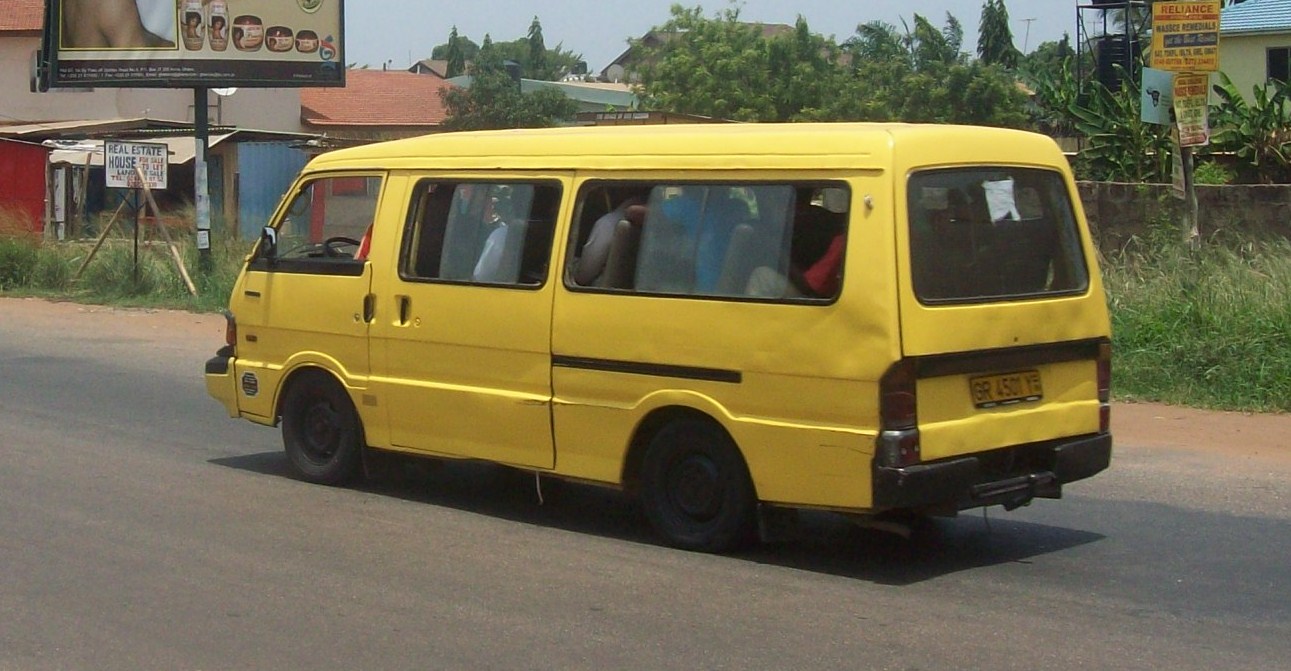 Transportation in Ghana is dominated by road transport. There are other means of transport within and between cities, such as by air and infrequently by water. However, road transport dominates and reaches far beyond the major cities, towns and villages and even into some hinterlands. Domestic flights are mainly the Accra to Kumasi route and Accra to Takoradi route. Domestic flights are however not affordable by many, as they prefer cheap flights.

The transportation business in Ghana is an old business. It has not changed much over the years, except for the type of vehicles used for conveying passengers. Road transport in particular, is currently operated by government and private businesses, as well as individuals. Buses, mini buses and saloon cars are the predominant types of vehicles used in Ghana for conveying people from one place to another.

There are various forms of road transport in the cities, but just one of these is operated in the villages due to the differences among the living standards, which impacts the forms of commercial transport that people can afford. Starting a transport business in Ghana is not cumbersome.

The transport industry is regulated by the Ministry of Transport. To start a transport business in Accra, the first and obvious thing is to get a minibus or a car. The regulatory and industry requirements have to be complied with before operations begin. These include vehicle registration at the authorized agency, road worthiness certification, insurance, income tax, business registration where necessary and appropriate improvements and add-ons to the vehicle such as yellow fenders, side embossments, etc.

You can start the business with a brand new vehicle or a used vehicle that is in good condition. Brand new vehicles are found to usually remain strong and well-conditioned for at least six years, whereas the used vehicles last for three years, beyond which repairs and maintenance cost begin to soar.

Commercial transport vehicles are operated in different forms. One of such is work and pay basis, in which the value of the vehicle is doubled and leased to a driver for weekly repayments from the proceeds (fares) over a period of two years or more, usually.

A prospective investor has an option to operate a transport business as rentals, taxis, trotro (short journey within the cities) or long journeys between cities and towns. It is important to monitor the drivers by installing RFIDs and other monitoring devices to be able to determine location and movements of vehicles. Another important thing to do in this business is cash collection and management.

The business involves regular cash inflows by way of daily proceeds made from the journeys. The cash needs to be banked regularly and managed appropriately to meet the possible financial obligations that may be required in future, by way of replacements, repairs and maintenance, statutory requirements like income tax and road worthiness, as well as insurance premiums.

Are there still opportunities to make money in this business? Of course, there are.  Accra’s population is estimated at 2.27million and 4million for the Greater Accra Metropolitan Area. Less than 20% own cars and an even lesser ratio for the estimated 27million Ghanaian population.

Road network in Accra and other major cities are getting better, as new ones are constructed and old ones rehabilitated. This means infrequent damage to cars, faster movement around the city, and with a rising population in and around the cities, the demand for taxi services and commercial transport in general are sure to rise. Taxi drivers are busier in Accra and other major cities than in small towns and villages.

Below is a summary of the business when using imported used-cars. All figures are in Ghana cedis.

*Estimates for work & Pay Basis are for 2 and half years because the car is transferred to the driver after this period. Annual income computed on a 52week basis.

The common and major challenges specific to this business are robbery, accidents, engine break downs and rise in fuel prices. Despite these seemingly tall challenges, you do not have to be discouraged from this investment.

Talk to an insurance company and the first two challenges will be buried. Though not 100% probable, it is advised that a sinking fund be created for the replacement of an engine over the period. The impact of Uber in Accra is expected to be felt in the taxi business, especially among working class passengers who desire comfort at affordable fares.

The haulage and cargo transport business is another form of transportation business in Ghana. Though not covered here, it is equally a lucrative business in Ghana but capital intensive. There is also the car rental business, which is active along certain routes like Accra to Elmina and other tourist sites in Ghana, and among certain groups, foreigners mainly.